Alboom has the mission of empowering people to live what they love.

We are an online solutions platform with users in more than 60 countries. Our main goal is to create new opportunities to increase income and improve the workflow of professionals such as photographers, videographers and visual artists.

Alboom is the only one to offer a complete set of solutions that includes the generation of sales opportunities (Alboom Pro Site), customer relationship management (Alboom Clicster CRM), selection and approval of images (Alboom Proof) through paging and the final layout (Alboom Designbox). Alboom is also a pioneer in providing the experience of watching videos in Augmented Reality (Alboom AR) from photos of your album, pictures, portraits, posters, etc.

With all these products in one place, the platform generates convenience and removes the barriers that prevent a professional from performing well his multiple responsibilities. From the beginning to the end of the process, the professional has control of everything being done to ensure quality, open new sales opportunities and ultimately exceed the customer’s expectations.

We are living the fourth industrial revolution, where technological innovation is impacting people’s lives at a speed never seen before.

Automating jobs and functions will have a direct impact on the employee / employer relationship, career development, and career transition.

Jobs that value creation, art, and personalization will also need to be reinvented to follow the digital transformation of society and meet new expectations of consumption and productivity.

One of the great challenges, in this context of technological transformation and increase of the world population, is the lack of supply of activities and jobs, which tends to worsen. Entities such as the World Economic Forum are warning that for the coming decades, it will be necessary to create 2 billion job opportunities to cover the deficit in the world.

With its expertise in creating tools and making them accessible to a huge group of independent, enterprising and creative professionals, Alboom has, in recent years, directly helped create more than 1 million business opportunities and has been able to boost the career of thousands of professionals, generating results and personal satisfaction.

With the vision of creating opportunities in the world and promoting social inclusion, we are committed to evolving and expanding the Alboom platform so that it becomes even more accessible and user-friendly, especially for young people who need an extra boost to progress and effectively in the labor market.

In early 2015, Arquimedes Ferreira, Marcelo Tesser and Rafael Bigarelli founded Alboom, in Jaú, State of São Paulo, Brazil. They developed a website so that Rafael Bigarelli, a wedding photographer, could easily publish his work, both on the site and on social networks.

Thus came the company’s first product, the Pro Site, and it was through word-of-mouth marketing that dozens of other professional photographers became interested.

In April 2015, they had the audacity to officially launch the Pro Site at the largest wedding photography event in Latin America, Wedding Brasil.

“We were in Wedding Brasil with a stand of 2sqm only, but in this small space we were able to sell about 70 websites. The websites we made were very different from the standard used at the time, with great photographers having migrated to our platform. Some of them were lecturers, like me, at Wedding Brasil, “said Rafael Bigarelli.

Unlike other website creators, Alboom Pro Site innovated by treating work as a professional visual portfolio rather than as HTML pages. This made the website not only look amazing, but the administration was very easy to do.

Arquimedes Ferreira, responsible for programming, was concerned with two things besides the visual impact. First, any professional who works with visual portfolio could identify with the usability of the interface. And second, that in any upgrade process it would be very easy to make the website better positioned on Google (SEO).

One of the first marketing actions of the platform was the deconstruction that creating or updating a website is complicated and painful.

Marcelo Tesser, thus, linked the brand with the moment of coffee. “Updating the site with a new job has to be a moment of pleasure, not a bummer,” said Marcelo Tesser.

In 2016, Alboom gained new ideas with the arrival of new partner and CEO, Marcelo Moscato, with 20 years of experience in the software and services industry. At SAP, as the division president for the Latin American region, he was the only leader to win the best region award in the world for three consecutive years and for six consecutive years won the SAP Winner Circle award, the company’s global high performance award . During his time with Avaya, he was awarded the Avaya Achievers Club for five consecutive years, and at Avaya and SAP he never failed to exceed his growth goals and goals.

Thus, with the arrival of Moscato, an aggressive growth plan was created called Alboom 2020, with the vision of making Alboom grow exponentially its number of users and at the same time diversify its portfolio of products. 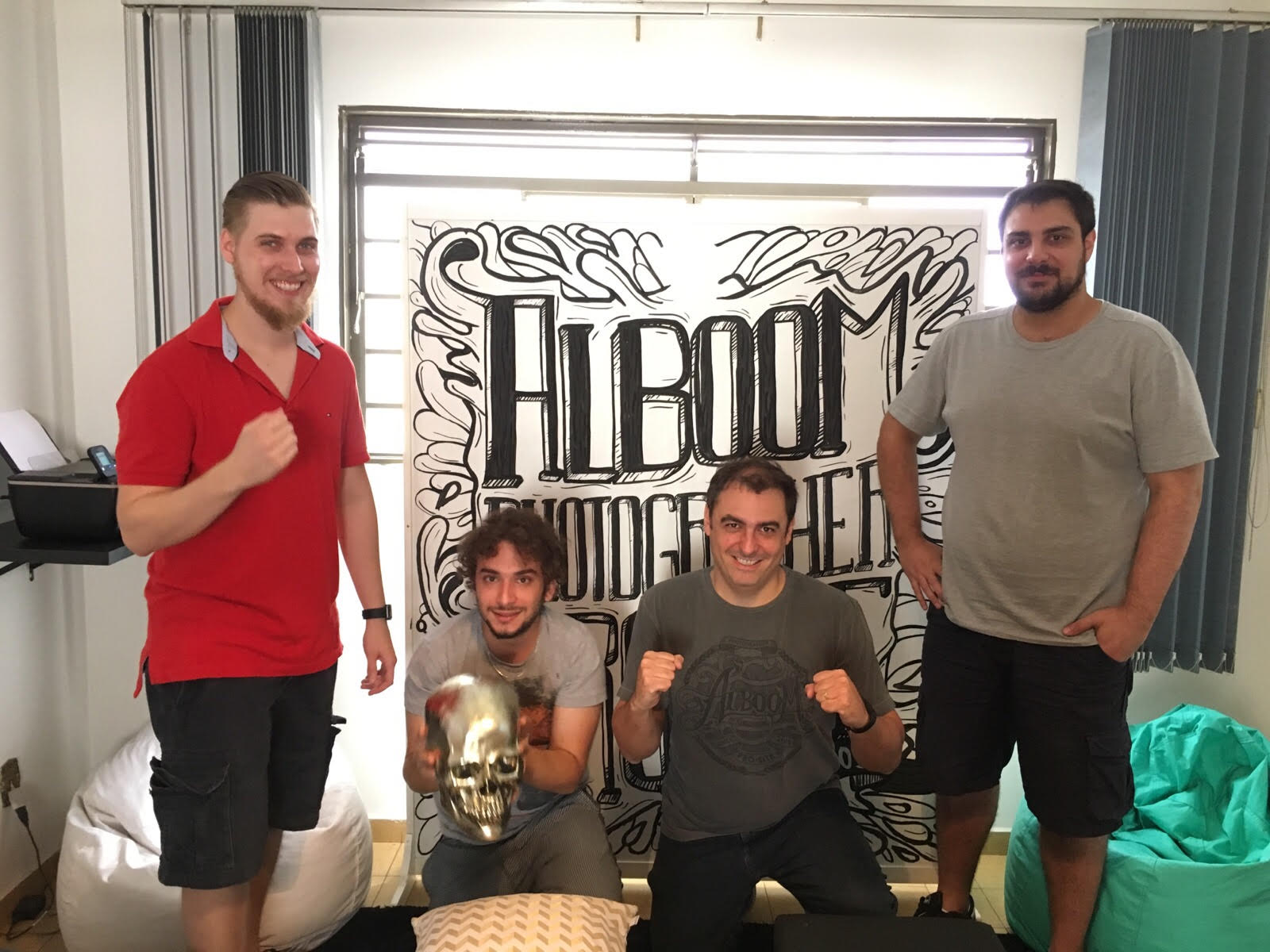 In the following months Alboom launched its new visual identity, whose essence remains to this day.

At Wedding Brasil 2017, in a stand of 18m², Alboom presented what was considered, until then, the greatest set of improvements of Pro Site. Called Pro Site 3.0, the update brought the ability to customize almost all visual elements, creating millions of new possibilities.

In the second half of 2017, three major steps were taken towards the construction of the so-called Alboom super platform, with new products and growth acceleration plan.

First was the merger with Clicster, a pioneer in online CRM and built to allow the complete management of the business, from sales to finance. Clicster (as well as its original PhotoManager product) was created by Anderson Miranda and in less than three years has become the solution most used by photographers and studios in Brazil.

Anderson Miranda and Rubens Vieira, both directors of Clicster, joined Alboom’s governing body after the merger. Following the announcement, the growth of Pro Site and Clicster was even more significant and the Alboom platform became the largest platform for photographers and visual professionals in Latin America with more than 10,000 active customers.

The second strategic step was the partnership with Magipix, a pioneer in creating augmented reality experiences in Brazil, to build what companies have called a new generation of augmented reality use in the market.

“We are passionate about photography, the media, and we believe that augmented reality experiences will generate tremendous value to all professionals and companies who live from their visual portfolios to generate business. We are proud to join Magipix with the common goal of scaling this technology in the market and the potential is enormous, “said Marcelo Moscato, CEO of Alboom.

With a focus on expanding the team and growing internationally, Alboom also has a number of partnerships that have significantly increased its execution capacity. In this sense, three partnerships deserve to be highlighted: Amazon, Microsoft and GAA Business. In the first two, Alboom was approved as startup sponsored in its TOP programs for the sector. With GAA Business (gaabusiness.com), Alboom achieved its first round of investments with the focus of accelerating its international expansion strategy.

With the strategy of becoming a complete application platform, Alboom is surprised to launch three new applications at the same time (Alboom Proof, Alboom Designbox and SearchPhotograph). Result of months of work and a stealth incorporation, the new products were presented to the public in April 2018 at the Alboom Summit, Fotografar and Wedding Brasil conferences.

At Alboom Summit, Alboom also presented solutions and news, it awarded its most active business partners in the year, in different concepts, totaling five companies. 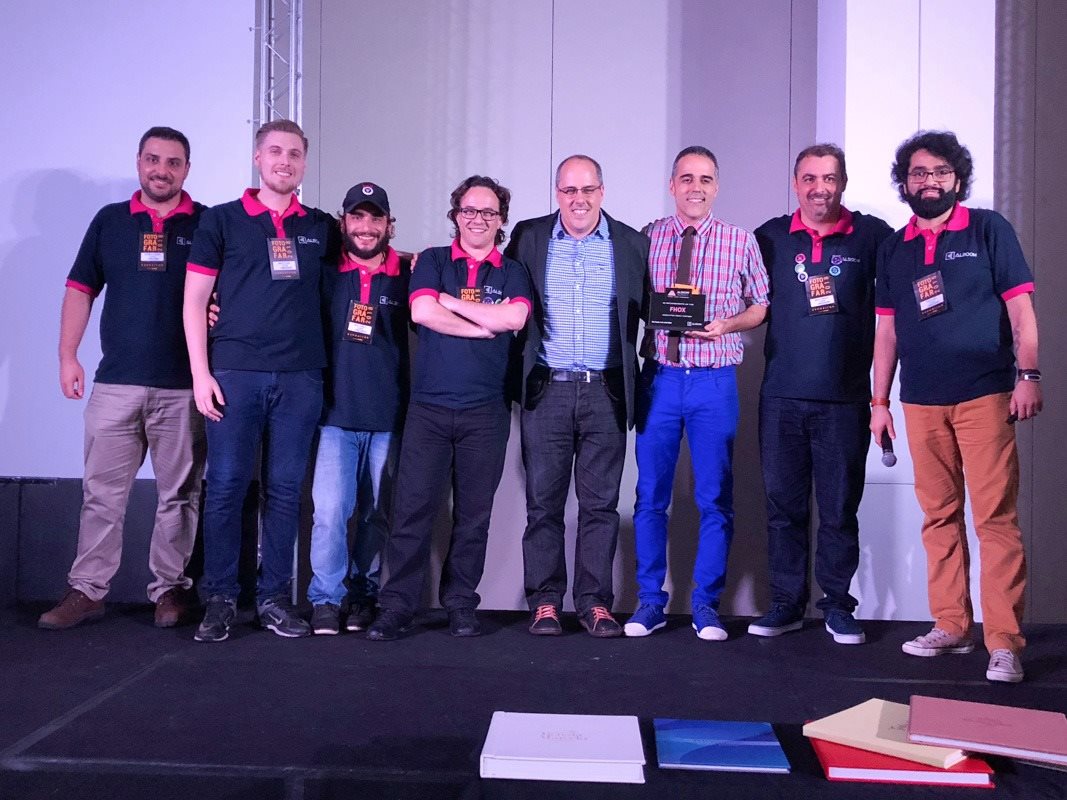 Alboom summit also marked the first event produced by Alboom for customers, with the crowded auditorium. 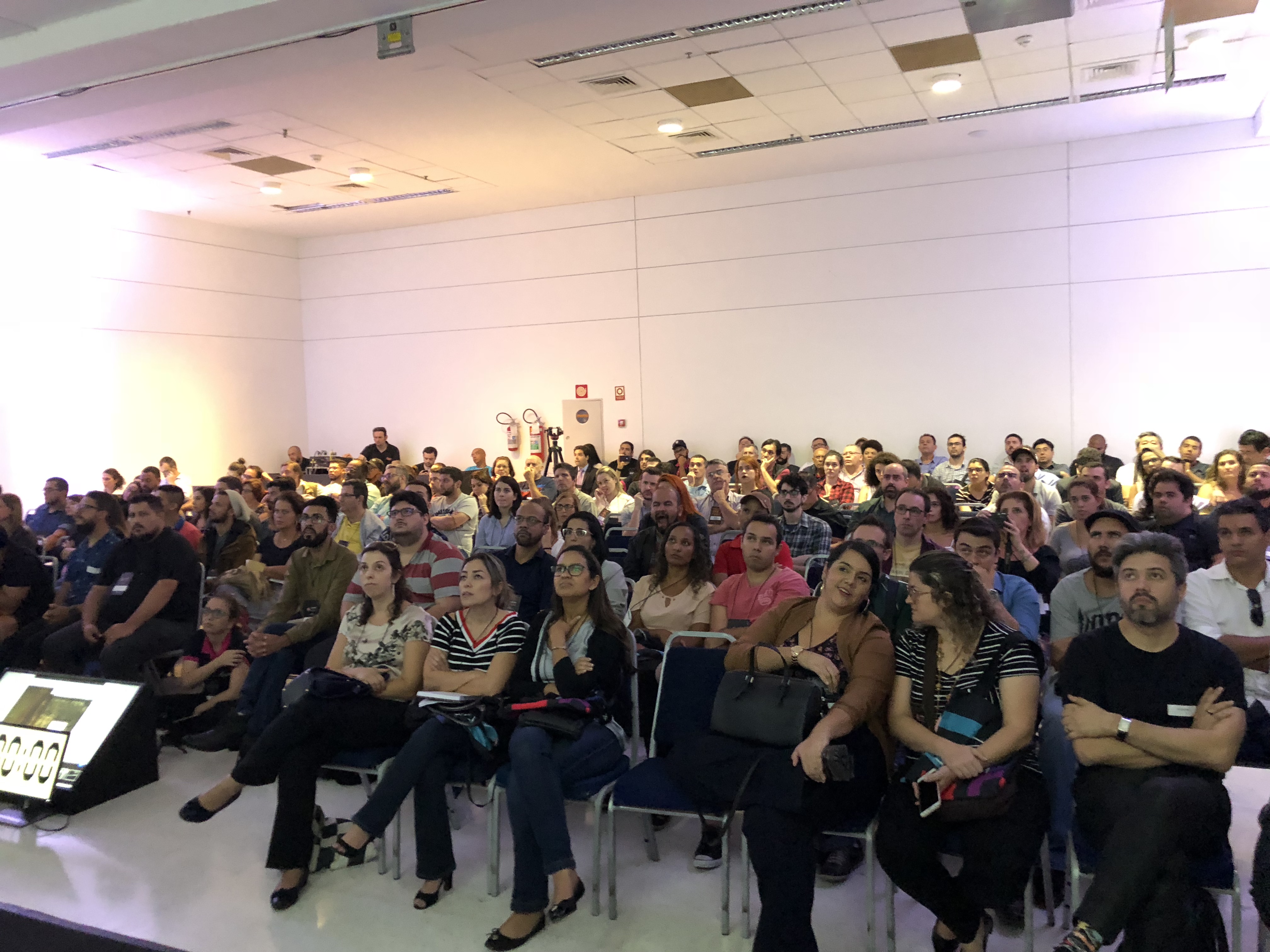 Designbox presentation during the 2018 Alboom Summit

Two weeks later, we began selling these incredible solutions in a 90m² stand, marking history at Wedding Brasil 2018, which celebrated its 10 years of road with us. 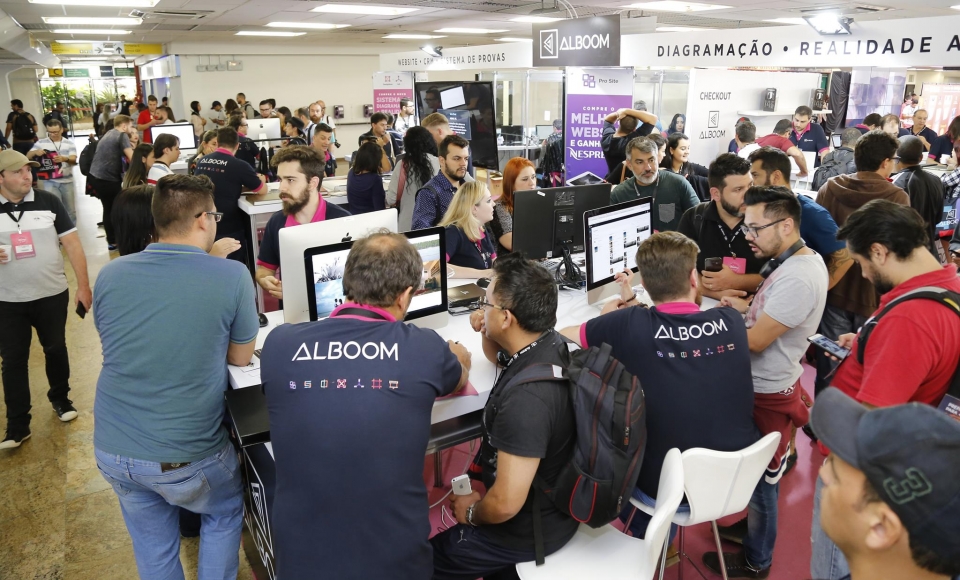 In addition to innovating and presenting solutions that facilitate the life of the visual professional in all stages of their workflow, we inspire the participants in leading the Entrepreneurial Core.

Our directors Rafael Bigarelli and Rubens Vieira presented great names in photographic entrepreneurship, as well as sharing experiences with the lecture “Eu, Fotógrafo?“. 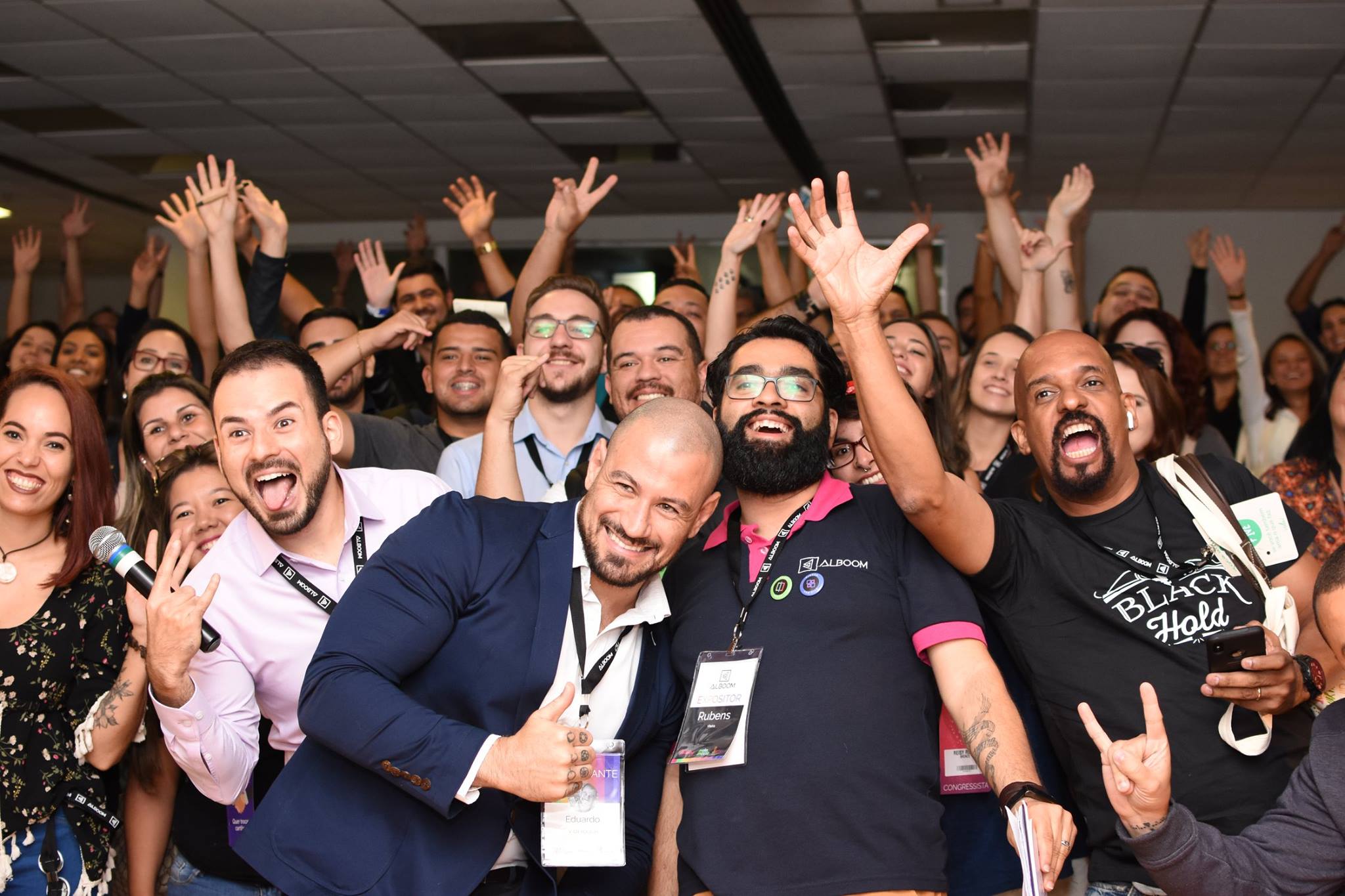 Eduardo and Gustavo Vanassi, Rubens Vieira and congressmen during the Núcleo Empreendedor, at Wedding Brasil 2018.

And we come to new airs!

Another Alboom event happened in Argentina! Students, photographers and videographers with 1 month or 15 years (and even more) of experience gathered in Tucumán to exchange experiences on career, life and business during the Destination Wedding. 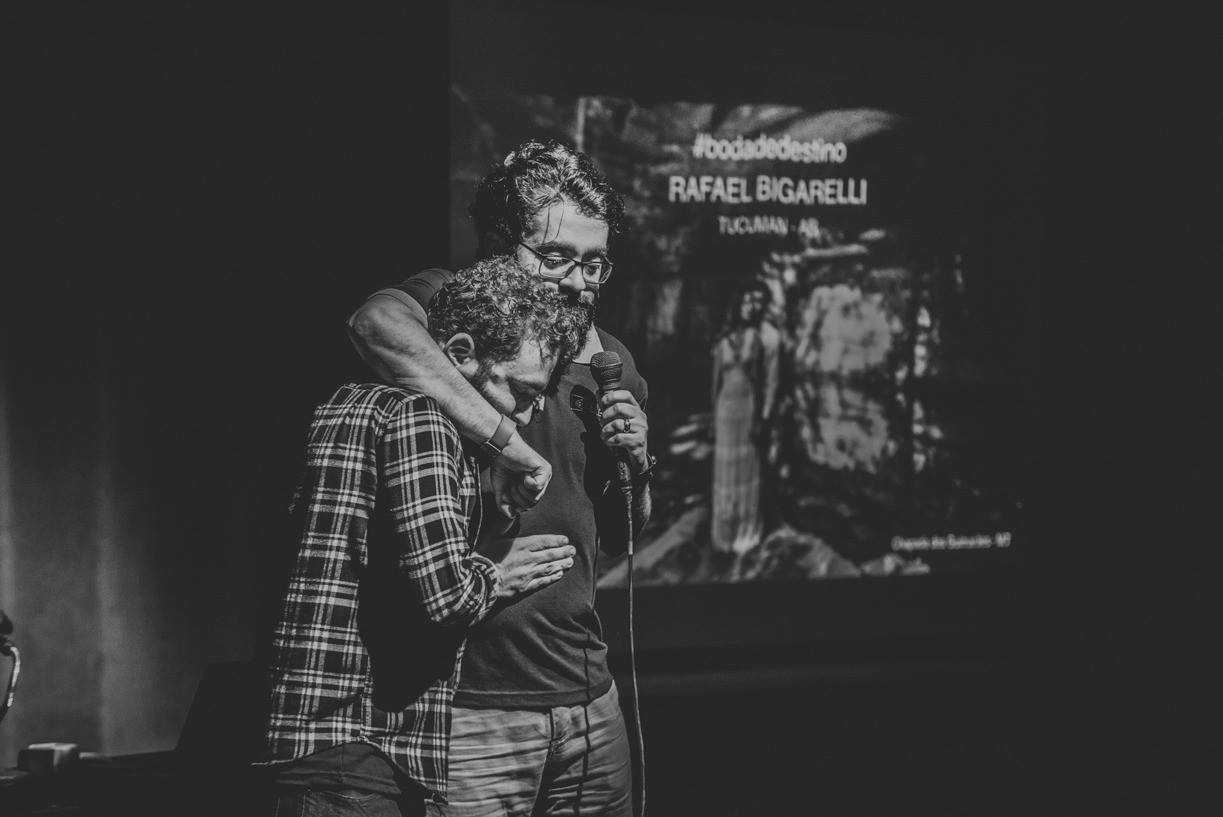 Rubens Vieira and Rafael Bigarelli during the presentation at the Destination Wedding in Tucuman – AR.